This was another one-day workshop–this time with the Wapping Group president Roger Dellar organised by Irene Foster of Woburn Gallery, and held in Little Brickhill Village Hall.

Whilst I had branched out into modern technology and bought myself some water mixable oils, the rest of my classmates has stayed in the hardcore realm of white spirit to thin their paint and clean their brushes… so as the day went on I liked the air in the room less and less, and was appreciating my own personal choice. Even the Zest-it or whatever it was (I’ve got some Sansodor too) still stinks and I can taste the fumes after a short while. And by the end of the day I was craving outside and fresh air.

We started with a demo and sat round as Roger worked his small canvas from an even smaller photograph–he had a stash and we just picked one for him to work from. 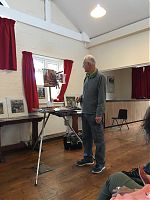 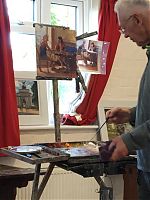 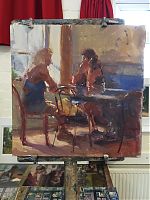 The first weird thing (for me) was the darks-first approach, with the idea we’d add the highlights afterwards (my watercolour brain was sent into an anxious spin).

Not only that, but the shadows were over painted ie painted bigger than they actually were , so the highlights could be cut in afterwards. 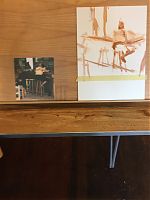 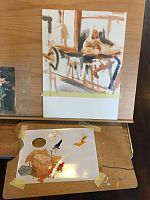 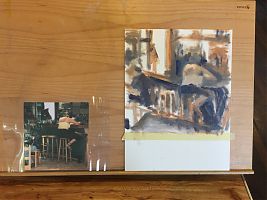 I started with the mid tones from my chosen reference photo, working on a (small) canvas board. I next added the darker tones, and tried to incorporate Roger’s other technique of connecting areas of shadow together.

Anyway, after 30 years of not touching oils, this is was my attempt. 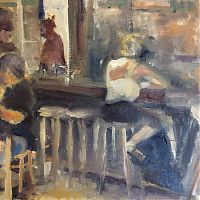 It was a bit smaller than I might have liked, and I was also using square brushes to Roger’s round ones. Oh, and I was a bit careless with my initial sketch proportions, too. However, I was quite encouraged to try again, and liked the way the paint remained still workable across the day (even if I had to be careful transporting my work home).

Just as a final point, when comparing oils with acrylics, one of Roger’s complaints was that they dry darker.. which was honestly something I’d never really paid much attention to, so all I can assume it’s not a massive shift with the Galeria paints I normally use… although the drying time was time was unrecognisably different.